When Firestar first came to the clan, he seemed to have quite a crush on Spottedleaf even though she was a medicine cat. He grieved for her greatly when she died. Spottedleaf continued to guide Firestar through his dreams. She respects Firestar's relationship with Sandstorm. Spottedleaf says that she had loved Firestar but he deserved someone he could actually be with (Sandstorm). Spottedleaf gave Firestar one of his nine lives, the gift of love. She said to use it well, especially for Sandstorm. In the Last Hope, when Spottedleaf's spirit is destroyed, Firestar is very upset yelling that Spottedleaf said she'd wait for him in StarClan. Yellowfang tells Firestar that it was her destiny and not to change it. Firestar dies and goes to StarClan at the end of the book, but Spottedleaf's spirit was already destroyed. 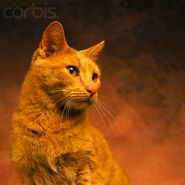 Spottedleaf
Add a photo to this gallery
Retrieved from "https://ultimatewarriorcats.fandom.com/wiki/Firestar_and_Spottedleaf%27s_relationship?oldid=10569"
Community content is available under CC-BY-SA unless otherwise noted.