Cats Outside the Clan-

Lord of the Rings

I love LOTR!!! My favorite characters are Aragorn, Legolas and Arwen. I ship AragornXArwen and ÉowynXFaramir, but just so Éowyn will LAY OFF ARAGORN BECAUSE HE'S TAKEN! Sorry about that... Oh, and don't listen to Redfern about Legolas because she will lie and say I can't marry him because he's "a fictional character". Doesn't she understand that fictional characters make the best husbands? KK bye! Cinders are Blazing яєтυяη оғ тнє кіηg 15:49, April 8, 2012 (UTC)

BEST FRIENDS: Are the reasons you have no food.

FRIENDS: Bail you out of jail and tell you what you did was wrong.

BEST FRIENDS: Have a wet shoulder from your tears.

FRIENDS: Borrow your stuff for a few days then give it back.

BEST FRIENDS: Keep your stuff so long they forget its yours.

FRIENDS: Know a few things about you.

BEST FRIENDS: Could write a book about you with direct quotes from you.

FRIENDS: Will leave you behind if that is what the crowd is doing.

BEST FRIENDS: Will kick the whole crowd that left you.

FRIENDS: Would knock on your front door.

FRIENDS: Will talk meanly to the person who talks meanly about you.

BEST FRIENDS: Will knock them out.

FRIENDS: Will read this.

BEST FRIENDS: Will steal this, and put it on their profile.

Hi! I'm Cinderstar! I am a dark gray tabby she-cat with a white ear and tail tip, and dark blue eyes. I am the leader of ThunderClan. I am also part every Clan. My father, Oakclaw, is ShadowClan/ThunderClan, and lives in ThunderClan with me. My mother, Swiftwillow, is WindClan/RiverClan, and lives in ThunderClan, too. I am distantly part SkyClan as well. My mate, Twiststripes, is a gray tabby and black tom and is extremely supportive. My best friend is Redfern/star, of RiverClan. She is a dark ginger she-cat with blue-green eyes.

I was born in WindClan to my mother, Swiftwillow, with my sisters, Featherkit and Splashkit, and my brother, Sunkit. My father, Oakclaw, was living in ThunderClan. When I reached six moons, I was apprenticed to Nightshadow. At my first Gathering, I met Redpaw, later Redstar, of RiverClan. We became instant friends. At my warrior ceremony, I was given the name Cinderblaze. My littermates were named Featherbreeze, Splashcloud, and Sunflight. I decided to go live in ThunderClan then, because I disliked WindClan. My mother and littermates joined me there. In ThunderClan we were welcomed, and learned their ways quickly. I was given an apprentice, Songpaw, and appointed deputy by the leader, Emberstar. When he died, I became leader. Twiststripes became my mate and we have three kits, Duskflower, Windsong, and Sootcloud. I still maintain a close friendship with Redstar, and our Clans are allied because of it. After all, friends are most important!

I am a hard-working student, a loyal friend, a brave fighter, a neat cleaner, an optimistic thinker, an avid reader, an imaginative storyteller, and a creative writer. I have a group of really good besties, the Four Muskateers, including the real-life Redfern. I love animals, mainly cats (of all kinds), wolves, horses, and my dog, Vino. I am a (mainly) straight-A student. I absolutley LOVE all things food and/or foodish! I have read every single Warriors book. I also own almost every single Warriors book (lined up proudly on my loooooonnng Warriors shelf.) And I LOOOVVVE the couple CinderheartXLionblaze. You bag on them, and I shall KILL YOU!! Okay, bye!

Cats That I Hate Their Guts Out!

1. Breezepelt- I wish he would fall out of a tree. It would bring me great pleasure.

3. Thistleclaw- He almost killed Oakheart, and is the reason Tigerstar and Scourge turned out bad!

8. Tigerstar- It's really not his fault he turned out bad, it's just...yeah.

9. Hawkfrost- Yeah, you show a lot of love towards your brother. Sure you do.

11. Mudclaw- WHY the dude went to StarClan, we'll never know.

12. Sol- I'd absolutely love to push him off a cliff, and into the ocean. HE SUCKS!!

13. Onestar- They owe ThunderClan EVERYTHING, and repay them by attacking in the middle of the night!!!

14. Hawkheart- He just had to kill Moonflower, didn't he?

18. the butthead Stoneteller- He forced Brook and Stormfur out of the Tribe because they tried to HELP!

19. Nightcloud- Crowfeather never really loved you! Get over it!

And finally...21. Leopardstar(kind-of)- She is the Queen of all buttheads!

Names I Have Issues With

Furzepelt- I had to look up what a furze was...had no idea.

Greeneyes- just an odd name, cuz did her mother really name her after her eye color?

Halftail- it's mean to give a cat a name like that!

Mumblefoot- is he really that clumsy? really?

Lostface- don't even say that name around me. call it the "LF" name.

Blackstar: "Ratpaw, from this moment on you will be known as Ratscar."

Ratscar's mother: "My poor son! Just because he has such a big scar doesn't mean it has to be his name!"

Ratscar: "But Blackstar, that's the worst name ever!"

Blackstar: "Quiet you! No complaning. I name the cats around here. Clan, cheer for our new warrior!"

~And scene ends. Thank you.~

Heathertail: "Your whiskers wouldn't happen to be on your nose, would they?"

Boulderpaw: "I think he needs reminded where his whiskers are!"

Whiskernose: (under his breath sarcastically) "Thank you, Onestar."

As you can see, I'm definitely "one of the guys." Deal with it. 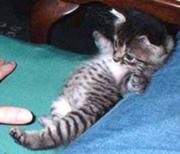 He's on the border of cute 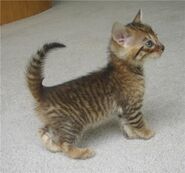 How are they that small? 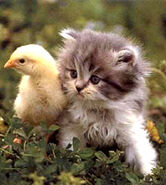 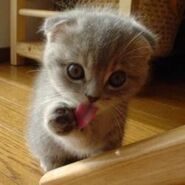 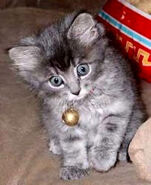 He needs to drink more decaf 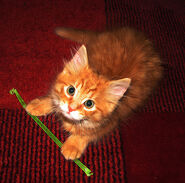 Is that celery? Wha-?

Nevermind, I think this is the cutest 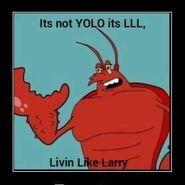 And then there was an explosion of the tomatoes! *boom* 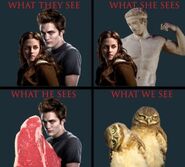 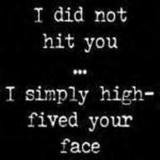 My excuse for everything...

I used Squidward's clarinet to unclog my toilet!

Firecat is not amused 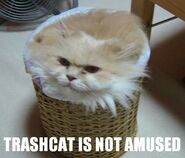